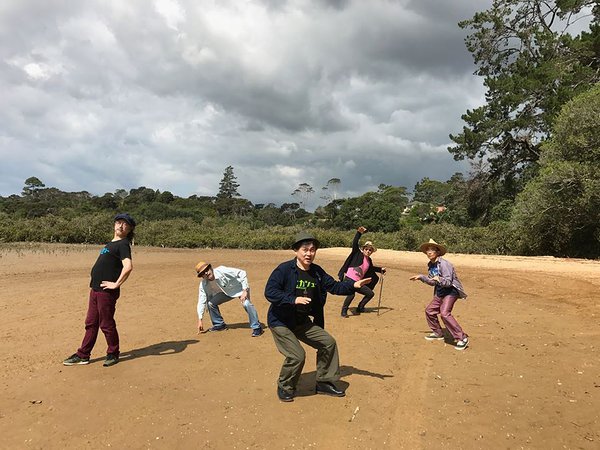 Although being recognized as a rock band, Hikashu has been incorporating elements of spontaneity and improvisation into their music for years. For instance, their concert has
no setlist and with lots of room for experimentation.
In a sense, vocalist Makigami Koichi decided to pursue music accidentally. In his formative years, his main aspiration was to become an underground theater actor. But preparing some original music for his own theatrical work with friends, he soon
discovered how enjoyable it was, and the friends felt the same, so they decided to form a rock band together instead of theater. They called themselves Hikashu and that’s how the band started. It was 1978. Among the friends was Mita Freeman, who was originally an actor but started playing guitar as well. He and Makigami met for the first time while attending the same high
school and have been together ever since. In 1979, Hikashu landed a major contract and released the first single called “At the End of the 20 Century.” The song, written by Makigami, featured his distinctive vocal and the sounds of synthesizers and rhythm box which were quite new then. They were accepted as a pop group with some strange twist. At that time, new wave rock and synth-pop were in full bloom, and as a part of the movements, they were widely recognized. At first, they enjoyed unexpected popularity, but found there were some restrictions and uneasinesses about being a pop act. Soon they sought freedom and independence, so they started to take an self-sufficiency approach. About that time, bass player Sakaide
Masami joined the band and has been staying since then. Despite difficulties, the band remained to be active in the live circuit and released albums steadily after that.
In 2003, Makigami invited keyboard player Shimizu Kazuto and drummer Sato Masaharu to the band. They were both experienced musicians and prominent improvisers as well, and their participation made the band into new direction again,
leaning toward experimentation differently than before. In 2005, Hikashu recorded an album called Ten-Ten, which is solely consisted of genuine improvisations, lyrics and all.
Recently Hikashu often plays in jazz settings. They regularily perform at jazz festivals like Yokohama Jazz Promenade and Jazz Art Sengawa. Also in 2011, they played at an
acclaimed avant-garde musical venue in Moscow called DOM Cultural Center. It was a huge success and the band was back to play there again this year.

Makigami Koichi is a renowned voice performer and multi-instrumentalist who has been playing around the world for years. He has performed with Derek Bailey, John Zorn, Ikue Mori, Lawren Newton, Fred Frith, Otkun Dostai, Bolot Bairyshev, Phil Minton, David Moss, Tom Cora, etc. He is one of the most representative Japanese performers of Tuvan throat singing, which is a tradition in Tuva Republic of the Russian Federation.
Also, he is a co-producer and a main curator of an avant-garde jazz festival called Jazz Art Sengawa which has been held annually in Chofu-City, Tokyo since 2008.

Mita Freeman is a guitarist, composer and record producer. Besides being a prolific songwriter, he has been a distinctive practitioner of improvisation for years. He is the original member of Hikashu, and the other frontman of the band, along with Makigami. His own group, called Lu Inchi, was formed in 1977 and continues to this day.

Sakaide Masami started working as professional musician while still attending college. He joined Hikashu in 1982. In 1988, he decided to move to Germany and settled in Dortmund while being in the band. During the period he experienced the collapse of Berlin Wall in person. Now residing in Tokyo, he has been active as a composer and sound designer for tv and theater.

Shimizu Kazuto is a composer, arranger, and multi instrumentalist who plays piano, synthesizer, bass-clarinet and marimba. Started playing professionally in late 1970s, he
has been working in genres like progressive rock, pop, jazz, and free music. Currently, besides being a sought-after session musician, he leads his own groups Arepos and the Precambrian Clarinet Quartet.

Sato Masaharu is a percussionist, voice performer, and composer. When he made his professional debut as a drummer of Bi Kyo Ran, the early Japanese progressive rock
group, he was still in teens. In 2002, he recorded the first solo album called “Tappi” [the Flying Dragon] in France, which was co-produced with Bernard Paganotti (ex-Magma).
Now, while engaging in various projects, he heads his own groups Massa, Bokura No Shizen No Bouken, and Kuro Yagi Shiro Yagi.