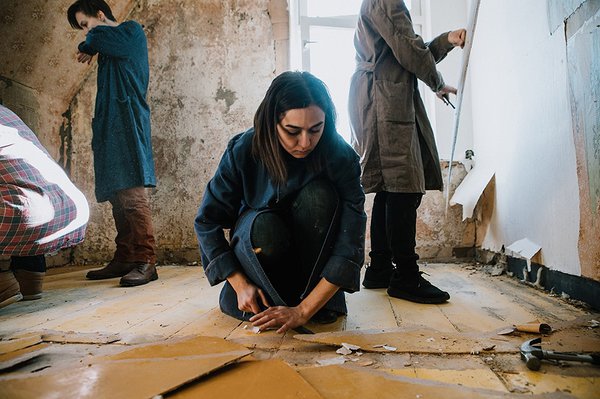 A Real Estonian Knows How to Build a House

/In English below, NB! the event is held in English/

Why do people repair things? And how does repairing contribute to define collective memory and form individual identities? The Kogo Gallery kindly invites you to discuss tinkering, fixing, and why not, also breaking and neglected heritage, this Saturday at 15:15. We have organised a conversation between artist Bita Razavi, ethnologist Art Leete and anthropologist Francisco Martínez in what used to be Kogo gallery, but has now mutated into the “Museum of Baltic Remont”. The talk will be moderated by art critic Indrek Grigor.

In 2016, Bita Razavi bought a house in the Estonian countryside, by her own will, no one forced her to do so. Through the experience of renovating a house in Lääne-Virumaa, Razavi came in close contact with the cultural-historic layers of the Soviet culture of “remont”. Layers and materials that, in their weirdness and haunting charm, have been neglected and covered by new layers of the so-called Euroremont period. Even though aesthetic standards have changed and trends of interior design suggest an increasing appreciation of past things, Soviet remains are still considered as something to just rip off and throw away.

Also in 2016, professor Art Leete developed the concept of “Echo of the Urals” for the Finno-Ugric exhibition of the Estonian National Museum, and the show Aesthetics of Repair in Contemporary Georgia curated by Marika Agu and Francisco Martínez opened in the Tartu Art Museum. Francisco and Marika wrote in their curatorial statement: “repair in Tbilisi is a state of permanent unfinishedness and approximation, unstable equilibriums, low-key engagements, and ill-considered forays of improvement… appearing as a way of keeping people busy”. Since then, Francisco has done fieldwork about repair in other locations, including Estonia, learning that the socialist legacy is still essential to an understanding of current developments in the country.

Bita Razavi’s initiative to engage with this neglected heritage and create the “Museum of Baltic Remont” at the Kogo gallery is not a coincidental choice either. Tartu is symbolically dominated by the presence of the Estonian National Museum at Raadi, which following a classical national narrative tells a rather romantic story of Estonia and Estonians – where did we come from and where we are heading to. But as it is characteristic of most national museums, this story is a rather mono-ethnic story, which presents the Estonian society and identity as monolithic, neglecting other cultural legacies and practices.

Bita Razavi (born Tehran, 1983) lives and works between Helsinki and countryside Estonia. She holds a Bachelor’s degree in Music performance from Tehran Art University, and a Masters in Fine Art from the Finnish Academy of Fine Arts. Razavi's practice is centred around examining the inner workings of social systems in relation to the political structures of various countries. Razavi reacts to and explores the agency of objects and systems as they act upon her and as she documents and records them. She has exhibited her work at Tehran Museum of Contemporary Art, Finnish Museum of Photography, Videobrasil, SESC Pompeia, Cité International des Arts, Paris, Fotografisk Center, Copenhagen, Göteborg International Biennal for Contemporary Art, National Art Museum of Ukraine, Kalmar Art Museum and Latvian National Museum of Art. In 2017 Razavi received the Oskar Öflunds Foundation’s grand prize.

Art Leete (1969) is a Professor of Ethnology at the University of Tartu and specialist on Finno-Ugric groups in present-day Russia. He is a former Research Director of the Estonian National Museum and curator of the museum’s Finno-Ugric permanent exhibition “Echo of the Urals”. His main research interests are related to contemporary religious changes among Komi people, as well as hunting practices.

Francisco Martínez (1982) is a Lecturer in the School of Museum Studies, University of Leicester. In 2018, he was awarded the Early Career Prize of the European Association of Social Anthropologists. He has published several books, including: Repair, Brokenness, Breakthrough: Ethnographic Responses (Berghahn, 2019); Politics of Recuperation: Repair and Recovery in Post-Crisis Portugal (Bloomsbury, 2020); Aesthetics of Repair in Contemporary Georgia (Tartu Art Museum, 2016); and Remains of the Soviet Past in Estonia (UCL Press, 2018).

The exhibition is supported by The Cultural Endowment of Estonia and by the city of Tartu, TYPA centre (formerly The Estonian Print and Paper Museum), Frame Finland, Kone Foundation, Nordic Culture Point and KUMA Brewery.
Thanks to Finnish Institute.

More info about the exhibition "Museum of Baltic Remont" www.kogogallery.ee