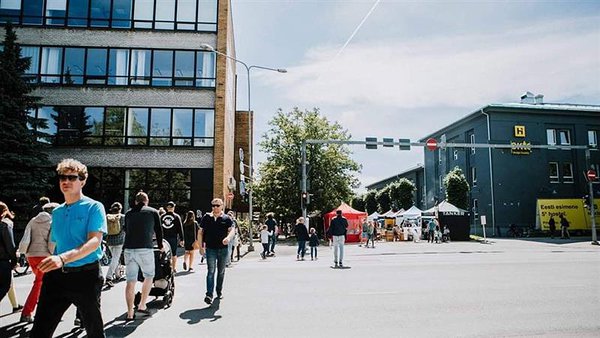 Creative cities serve as testing grounds for trying out solutions before replicating them elsewhere. The lack of resources forces to find creative solutions.

The way culture factories come into being is more or less the same everywhere. The time was up for factories that were caught in the loop of development in city centres or other valued areas: production was moved elsewhere, many of the factories closed while the more flexible ones changed direction in the new circumstances. Most of the factory buildings, however, remained empty and suffered vandalism.

Although the transition of Aparaaditehas (The Widget Factory) in Tartu and the Telliskivi Creative City in Tallinn has been similar, the story of their rebirth is quite different. The Telliskivi factory was purchased in the 2000s with a solid plan of shaping it into a modern office and living complex with new buildings. Unexpected economic crisis ruined these plans and since the owners had to find a temporary solution quickly, they started to rent out the rooms for creative workers for a reasonable price. The project that took off way more successfully than expected allowed the same investors to knowingly start shaping Aparaaditehas in Tartu into a culture factory. This is why making changes has been even bolder in Tartu, knowing that the model works and having a strong support of the city government from the very beginning.

The predecessor of Aparaaditehas, that is, a culture factory in the making, was an old yeast factory in Ülejõe district. Unfortunately, it was in such a poor state that bringing the building into compliance with fire safety regulations to hold public events would have required expenses too steep for the owners to bear. Besides, they already had other development ideas. After a while, the initiator of the yeast factory project and the developer that puchased Aparaaditehas got together and as a result, we can now enjoy a vibrant and pulsating culture factory. The first tenant, Estonian Print and Paper Museum, has now settled into more spacious rooms on the territory of Aparaaditehas neighbour, Samelin shoe factory. Thanks to the resourcefulness and creativity of its manager, Samelin is one of the few manufacturing enterprises that has no plans of moving away from the rapidly developing area. Unused rooms are also rented out to artists and fashion designers. Soon, gallery Art&Tonic will open its doors, focused mainly on young art. It has become clear that if changes are not fought against and people go with the flow of development, even functions that seem incompatible at first could be united successfully.

Although the impact of Aparaaditehas on the entire district was presumed, it is still surprising, considering the size of Tartu. On the mental map of the local people, the factory has always seemed far beyond reach from the city centre. Since years went by without anything ever happening there, the entire complex became invisible. Actually, it is a fifteen-minute walk from the Town Hall Square, seven minutes if you use a bicycle, and driving is the slowest way of getting there. Rapid takeoff of the culture factory has brought the perceived distance back to reality and the area is now seen as downtown. The factory and the Hektor Design Hostel right next door has increased traffic in the area. The main aim, however, is to provide a pedestrian-friendly public space. We cannot do without public parking lots at the moment, but the city has no plans of extending them; rather, the number of parking spaces will drop in the future. This means that people need to focus on getting around in the area on foot, by bicycle, or with public transport.

Telliskivi Creative City has been the hotspot of the capital for a long time. A gathering place for hipsters has turned into an area enjoyed by all sorts of people. Vibrant and chill urban vibes have breathed new life into the entire area. In Kopli, Põhjala factory is coming to life. Although the character of these two factories is relatively unique (for instance, quite a lot of apartments are planned to be built to Põhjala), keeping two of such great magnets functioning in a city as small as Tallinn a challenge. Still, the two factories are already working together, so there is plenty of good will.

At least in its early stages, gentrification brought about by culture factories in their districts is different than what has happened in areas of cultural and environmental value. While in those areas, poorer population was replaced by a wealthier middle class, the neighbourhood of  Aparaaditehas is a home for mostly students and younger people who appreciate the proximity of the culture factory and do not mind the temporary inconveniencies (closed streets during festivals, nightlife). In Telliskivi area, however, another developmental stage has begun: revival brought by the creative city has also attracted the so-called regular developers, although office buildings, sport clubs, hotels, etc. may not quite match the overall vibe of the district. Conflicts that may arise due to decisions regarding urban, as well as social and emotional space, are probably most reasonably solved with a coherent outdoor space. That is exactly the route taken: the so-called old and new sections of Telliskivi will be brought together with a common square (Telliskivi 60 which is currently a parking lot) that should promote mutually enriching contacts. Bonding different types of people with city space, not isolating or differentiating them, is the first right step towards successful cooperation.

Traffic is restricted also in Telliskivi creative city. Such places are the best for implementing innovations that may not be received well at a first glance, since they bring together people that are more aware, believe that change is necessary, and dare to take chances (including economic ones). The owners of Telliskivi, Põhjala, and Aparaaditehas all support innovation and are not afraid to start a change.

In case of Põhjala factory, it is still too early to speak of gentrification. Still, the few events that have taken place and the first ceative sector enterprises that have moved in prove the necessity of such unripe places that are still full of opportunities. Greenhouse and vegetable garden started this spring has raised a circle of people that will probably plant a seed for the entire new community. Põhjala is also fueled by the energy and enthusiasm of only a few people, supported by the owners of the factory. In this developmental stage, a strong heart of the community is built and in case of any luck, it is also accompanied by participation and support of the local people. As the activities broaden and grow in volume, the positive attitude and a sense of “us” plays a critical part in the success of the entire initiative.

The impact of culture factories on city space is largely determined by their owners and leaders. Factories that are passive, directed inwards and mainly focused on servicing certain sectors (e.g. in Sweden), also either largely or entirely financed by local governments, have little impact on the city space. A culture factory functions only if its leaders are inspired by a desire to make a difference. Lack of resources and no fixed monthly income inspires creative solutions. Institutions funded only by local governments tend to become too comfortable and street food festivals, programme-packed summers, exciting outdoor space solutions, secret concerts, etc. will never take place. Since in Estonia, local governments act as partners to culture factories and not their main source of income, our factories have become highly attractive also to foreigners.

Local governments should learn how to utilise the social activeness and impact of culture factories even better, so that they could together implement possibly unpopular, but right and promising decisions regarding city space. Creative cities serve as testing grounds for solutions before replicating them elsewhere. For instance, at the initiative of Aparaaditehas , a second-hand shopping center is planned in the neighbourhood. Cooperation between public and private sectors pertaining to public space and values should be based on local magnets. The best decisions on communcal life are born when the political credit of local governments and the social capital of culture factories are joined.

Culture factory as an influencer of city development (by Karin Bachmann, landscape arhcitect and Aparaaditehas Creative Board member)